From Cajun to Catfish — The Food Scene in Clarksville

A tornado raged through the small town of Clarksville, Tenn., 22 years ago, devastating its historic downtown. But now, two decades later, the city boasts a food scene that’s coming of age.

City officials and business leaders, though, turned the loss into a gain, pushing ahead with plans for downtown redevelopment that were being considered even before the losses incurred by the tornado. Restaurants now fill once-empty storefronts and bring hometown folks, students from nearby Austin Peay State University and visitors to enjoy the flavors of the city.

“One of our greatest challenges is just getting people off the interstate into downtown,” says Michelle Dickerson, director of media and marketing for Visit Clarksville. “Once they do, they come back. The historic architecture, downtown vibe and good food are part of what makes the memorable experience of Clarksville.”

What makes the foodways of this city a little different from others are the international flavors that veterans from nearby Fort Campbell bring to the table. Clarksville is about an hour northwest of Nashville and maybe 20 minutes south of the military base just across the state line in Kentucky. Dickerson says the majority of Clarksville’s restaurants are owned by veterans, many of whom were stationed overseas and brought back the flavors of the countries in which they served.

Like many towns, Clarksville has witnessed the food trend of buying and serving local foods, and this, Dickerson feels, has also helped spur interest in supporting local restaurants. And while she says at this time the town is more of a regional dining destination, “we’re moving in the direction of people coming here for the weekend to stay and try our restaurants.”

Here’s a taste of the Clarksville experience. 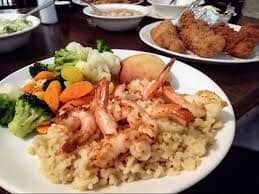 The Catfish House in Clarksville has grilled shrimp on its menu, but you’d be hard put to find a table without fried catfish.

You might drive right past this shopping center eatery. For starters, it’s on a busy road, and you can easily miss it as you speed past. Secondly, this day and time, restaurants in strip centers are often passed by in favor of ones in a town’s more historic areas. But you’ll be hard-pressed to find better chicken than what spins on a huge rotisserie behind the counter. Order the chicken naked or with a number of toppings, from a spicy chimichurri to a milder Caribbean barbecue rub and three, such as tandoori, that will kick your tastebuds into gear. The owners are from Trinidad, Tobago and Pakistan, making the flavors a celebration of global gastronomy served in a very casual setting. It’s a strip-mall eatery after all. No alcohol is served here — just water, tea and soft drinks — alongside some amazingly tender chicken.

From preserving the tin ceiling panels high above your head and restoring the old brick walls, Greg and Theresa Shea have made an example of how a well-worn space can be brought up to date while keeping its historic charm. The Sheas are natives of New Orleans, as evidenced by not only the name of their restaurant but also the menu. It’s a mouthwatering blend of favorites from the Bayou State — gumbo, etouffee, red beans and rice — and Southern fare such as meatloaf and mac and cheese. But expect the unexpected with dishes such as Pig Out Grits and Gravy (fried pork loin over grits); Catfish Marigny (fried catfish over jambalaya) and Eggplant Orleans (eggplant with crawfish etouffee and cheddar bechamel with shrimp and crab over pasta).

Roux AmeriCajun opened in 2017 as the first Cajun restaurant in town. “Response was overwhelming,” Greg Shea says. And it hasn’t stopped. In fact, the restaurant recently began opening its doors for lunch and offering authentic Cajun crawfish boils on the back patio during crawfish season, which ends in mid-June.

By no means is Blackhorse the only brew pub in town, but it’s one of the most-popular and oldest. “As the city has grown, so has business here,” says owner Jeff Robinson, a veteran of Desert Storm who took early retirement and saw the need for a brew pub in Clarksville. “It’s part of the evolution of Clarksville.”

Robinson opened the eatery in 1992 — before the tornado hit town — and survived the lean years following. He named his restaurant after Blackhorse, the U.S. Army’s 11th Armored Cavalry Regiment. “It’s a unit I liked — and I liked the name, too,” he adds.

Deciding what would go on the menu required research, so Robinson went to work, traveling to major food cities like Chicago to get some ideas. “The restaurant business is a cool business to do research in,” he quips. Robinson came home with directions on how to make flatbread pizzas — the same way they do in Chicago — and added them to a now-diverse menu that includes burgers, sandwiches, salads, pasta dishes and more entrees, alongside a full bar that features 30 craft beers that rotate with the season. Robinson has also opened a second Blackhorse Pub & Brewery in Knoxville on Gay Street and will soon open a third in Alcoa, Tennessee. Blackhorse brews will make their appearance at Food City locations in Chattanooga this fall.

Located directly across from Austin Peay, Johnny’s is a Clarksville institution that’s been part of the college scene since opening in 1965. At the height of the lunch or dinner hour, you may be hard-pressed to find a seat at the counter or in one of the booths, but if you do, you’ll be set to order the best burger in town, along with a plateful of crinkle fries. The menu is filled with Southern fare. Daintier appetites might choose the grilled chicken plate, but rest assured, this is the kind of place you want to roll up your sleeves and dig in.

In the short span of one year, Strawberry Alley Ale Works, named for the street on which it stands — an area once filled with strawberry fields — is a brew pub and more. The fish tacos, burgers, salads, sandwiches and numerous entrees complement the 10 craft beers always on tap, such as Maibock, Joe B’s Brown Ale and Legion St Pilsner, along with an interesting selection of rotating beers. This is a restaurant that appeals to beer lovers and those who enjoy chef-inspired meals in a historic building turned brew pub. The interior with its high ceiling, exposed pipes and large window offers an open-air feel. Outside seating is also available.

Though it’s a jaunt from the town center, The Looking Glass is an oasis along one of Clarksville’s busy thoroughfares and well worth the drive. Walk into the restaurant and take in the sights and smells of freshly baked pastries, cakes, cookies and all things sweet made by the in-house pastry chef. There’s plenty of inside seating, but if it’s a pretty day, eat out back and you’ll feel as though you’ve stepped into a garden with a pond swimming with fish and lush, beautiful plants and trees. It’s hard to believe that the busyness of Clarksville lies right beyond the tall fence surrounding the space. The restaurant is known for its breakfasts and weekend brunch, but dinner is a treat, too, with specialties including Low Country shrimp and red rice; a rib-eye topped with charred demi-glace and blue cheese crema; and pan-seared salmon with charred lemon foam.

What river town isn’t complete without a catfish house on its riverbank? The Catfish House in Clarksville has been the go-to spot for its famous hand-battered catfish, homemade Alfredo sauce and homemade desserts since 1978. The restaurant has twice won the Chamber of Commerce GrowCo Award (for Growing Your Company Entrepreneurship), once in 1978 and again this year. The award is given to business owners and designed to honor those who have found success and made a difference in the community.

Here, sides such as white beans and coleslaw are brought to the table family-style, followed by platters filled with hot fried catfish and hush puppies. Not a catfish fan? Try a platter of jumbo shrimp over a bed of rice, a juicy steak or fettuccine alfredo.

The excitement Kennedy Voxe exudes when talking about butter is almost contagious, and it goes something like this:

“Have you ever heard of a butter candle?” she asks.

I shake my head.

“Neither had I before, like four months ago. Basically, you take melted butter and infuse it with whatever seasonings you want,” Voxe says, an infectious smile on her face. “Then you put it in a muffin mold and stand a cotton wick up in it. Then you deep-fry it so it’s, like, coated in oil, and when it solidifies, you have a butter candle. You put it on the plate and light it at the table, and the butter will disperse on the plate and create a sauce.”

Kennedy worked for a time in New York City and Nashville as a brand strategist with a focus on sensory perception.

“Brand strategy looks at what smells and tastes appeal to people, and I wanted to create a restaurant that really took that idea of heightening all of your senses to the extreme,” she says. So she returned to her hometown of Clarksville and opened The Mad Herbalist on the grounds of the former Hachland Hill, a Clarksville landmark.

“I decided if I could get people in Clarksville to eat food that’s a little outside the box, I could make anyone do it.”

So, together with chef Josh Hunter, the team serves a menu that changes every two weeks. The best way to describe it is to imagine an English tea. Meals at The Mad Herbalist are delivered to your table on a stand with three tiers, one holding the entree, one holding the salad and another the dessert.

The menu is posted at the door. On the day of my visit, it was cordon bleu casserole; a green salad with blue cheese crumbles, a slice of peach and blueberries with a mild vinaigrette; and lemon cakes for dessert. A choice of teas — hot, iced or with sparkling water — is offered for your beverage.

It’s a new way of eating in Clarksville and one that has become a welcome change of pace.